Rent a bike in the Pyrenees. 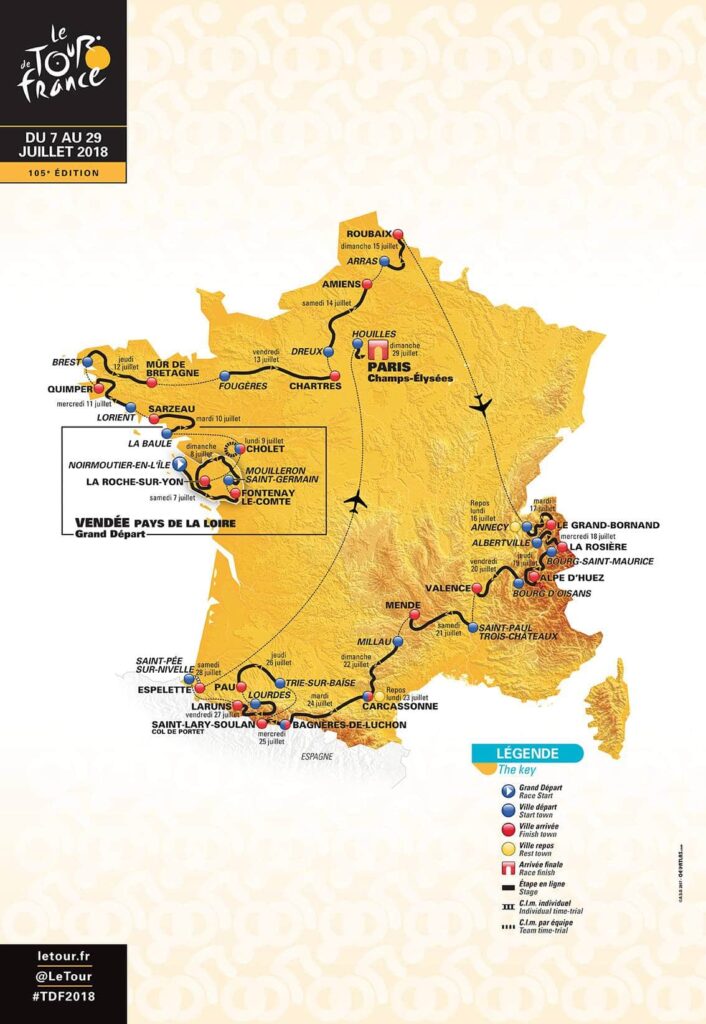 Rent a bike in the Pyrenees.

The 2018 Tour de France will include a total of 25 mountain climbs or hills and altitude finishes ranked in second, first of HC class.

The geographic distribution will be as follows:

Distinctive aspects of the race

Except for a short visit of around 15 kilometres in Spain during stage 16 between Carcassonne and BagnÃ¨res-de-Luchon, the 105th Tour de France will never go out of the borders of France. 36â€œdÃ©partementsâ€ will be travelled through and the Basque country that hadnâ€™t been visited since 2006 will once again be on the map of the Tour.

During the 9th stage, Arras > Roubaix, there will be 21.7 kilometres of cobbled roads. The riders will take on a total of 15 sectors with lengths varying from 500m to 2.7 kilometres.

Like it was the case last summer in Marseille, the winner of the 105th edition should be crowned after the 20th and penultimate stage, a time-trial between Saint-PÃ©e-sur-Nivelle and Espelette on a distance of 31 kilometres. After a three-year absence, a team time-trial of 35 kilometres will also be on the menu during stage 3 in Cholet.

Based on a decision taken by the Union Cycliste Internationale (UCI), each one of the 22 teams taking part in the Tour will, in 2018, be formed of 8 riders. There will therefore be a total of 176 riders present at the Grand DÃ©part in VendÃ©e Pays de la Loire.

Itâ€™ll be an innovation: from the Grand DÃ©part until and including the 9th stage, 3, 2 and 1 bonus seconds will be awarded to the first three who reach a specific kilometre of the course determined in advance. It will have no incidence however on the points classification.

More conventional: 10, 6 and 4 bonus seconds will be taken off the overall times of the first three of each normal stage of the Tour (except for time-trials).

There will be 9 locations or stage cities visited for the first time out of 39:

The 2018 Tour de France will start in the VendÃ©e region in western France. The race should then proceed north to Brittany, where it will use some of the dirt roads featured in Tro-Bro LÃ©on. There should also be an uphill finish on MÃ»r-de-Bretagne. Â It will then cross France towards Roubaix where some pava will be encountered. Than a transfer to the Alps for week 2 and the PyrenÃ©es in the last week, finishing in Paris on Sunday 29th July 2018.