The Circle of Death

The â€œCircle of Deathâ€ is the hardest Tour de France stage in the Pyrenees. It is a place whereÂ the Tour is often won andÂ lost. In modern times it has been the 200 km from LuchonÂ to Pau or vise versa. In 1910 it was the start of 326 km from Luchon to Bayonne.

The Tour de France first came to the high mountains in 1910. Stage ten in that yearÂ included fiveÂ brutal climbs. The first ever Tour climbs of the Col de Peyresourde, Â Col d’Aspin, Col du Tourmalet, Col du Soulor and Col d’Aubisque. JournalistsÂ wrote of the routes into the wilderness of the Pyrenees as â€œdangerous” and “bizarre”.

Tour director Henri Desgrange rampedÂ up the anticipation for months in his newspaper l’Auto and the FrenchÂ public eagerly awaited the reports from the mountains. Francois Faber held the race lead from stage 2. A tremendous duel evolved with hisÂ teammate, Octave Lapize. Desgrange elevatedÂ the excitement everydayÂ through articles in L’Auto.

Nobody knew what to expect as the race headed into the wildÂ mountains. There were riders who refused to start the stage as the organisers of Le Tour had made no provision to protect them from bears.Â This was much to the delight of race director Desgrange and his sponsoring newspaper L’Auto.

The stage started from Bagneres-de-Luchon at 03:30 on July 21st, 1910. It was a very hot day in the south of France. Only one rider, Gustave Garrigou, was able to conquer Col duÂ Tourmalet without dismounting his bike. For which he received a prize of 100 francs. There was no tarmac on the cols, just rough gravel and rocks. Race officials were anxiously waiting at the top of Col d’Aubisque, to see if any rider could make it over the five cols. As the day wore on they became more and more anxious. Perhaps the bears and vultures were feasting on exhausted riders. Perhaps they really had made a massive misjudgment. Eventually, local rider Francois Lafourcade was the first rider to pass. He did so with his head down in silence.

Fifteen minutes after Lafourcade, the second rider, Octave Lapize, appeared in great distress and rage, pushing his bike. AÂ climbing specialist he had pedaled, walked, stumbled and cursedÂ his way up the climbs. Upon reaching the top Lapize angrily eyeballed the race officials. As he passed he bawled at them, â€œVous Ãªtes des assassins! Oui, des assassinsâ€ (“You are murderers! Yes, murderers!”). He threatened to quit the race in Eaux-BonnesÂ at the bottom of the descent. Clearly, his humour improved as he descended, as he rode through Eaux-Bonnes. There was still 160 km and another climb, col d’Osquich, before the finish in Bayonne. Lapize caught and passedÂ Lafourcade on the way into Bayonne, and won the stage.

Victor Breyer, one of the l’Auto officials wrote of the scene:

And suddenly I saw him, a rider, but one I didn’t know. His body heaved at the pedals, like an automaton on two wheels. He wasn’t going fast, but he was at least moving. I trotted alongside him and asked, “Who are you? What’s going on? Where are the others?” Bent over his handlebars, his eyes riveted on the road, the man never turned his head nor uttered one sole word. He continued and disappeared around a turn. SteinÃ¨s had read his number and consulted the riders’ list. SteinÃ¨s was dumbfounded. “The man is FranÃ§ois Lafourcade, a nobody. He has caught and passed all the ‘cracks’. This is something prodigious, almost unbelievable!”

Still the minutes passed. Another quarter-hour passed before the second rider appeared, whom we immediately recognized as Lapize. Unlike Lafourcade, Lapize was walking, half leaning on, half pushing his machine. His eyes revealed an intense distress. But unlike his predecessor, Lapize spoke, and in abundance. â€œVous Ãªtes des assassins! Oui, des assassinsâ€. To discuss matters with a man in this condition would have been cruel and stupid. I walked at his side, attentive to all he said. After more imprecations, he finished by saying, “Don’t worry, at Eaux-Bonnes I’m going to quit. 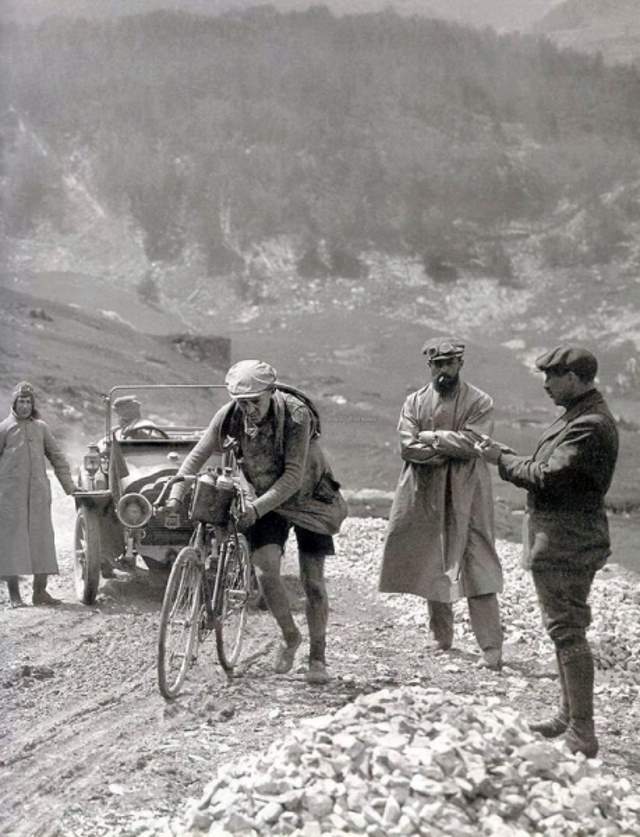 Octave Lapize went on to victory in the Tour de France that year. For Henri Desgranges the new mountain stages become a great success. With the inclusion of the wild and dangerous Pyrenees and Lapize yelling “Murderers” at Tour officials,Â legend was born. The journalists of l’AutoÂ contributed to the legend by naming the route from Col de Peyresourde to Col d’AubisqueÂ â€œThe Circle of Deathâ€. Where hopes of Tour de France immortality go to die. Where wild bears roam the cols. Where men are broken, emotionally, physically, spiritually, totally. Where a champions rage droveÂ him on to victory.Â The Assassins of the Circle of Death.

Over 100 years later, hundreds of thousandsÂ of cycling fans will line these same roads each July. They Will spend days and nights camped out in the blazing sun or the pouring rain and snow. Just to get the briefest glimpse of the legends of the road. Hundreds of millions of others will watch on TV, mesmerised by the riders, the fans, the mountains, the roads. The Circle of Death.Â Col de Peyresourde, Col d’Aspin, Col du Tourmalet, Col du Soulor and Col d’Aubisque.