The Tour de France has its origins in the political scandal known as the Dreyfus Affair which rocked FranceÂ and Europe in the last decade of the 19th century.Â The scandal began in November 1894, with the treason conviction of Captain Alfred Dreyfus, a young French artillery officer of Alsatian and Jewish descent. Sentenced to life imprisonment for allegedly communicating French military secrets to the German Embassy in Paris, Dreyfus was imprisoned on Devil’s Island in French Guiana, where he would spend nearly five years. Over that period what was a miscarriage of justice grew to be a scandal that rocked the French state to its very foundations.

Since its defeat by the German Empire in the war of 1870 and the annexation of Alsace-Lorraine by Germany, the French Third Republic had lurched from one political crisis to another. Society was divided by those who supported a right-wing catholic royalism and by the more leftist parliamentary republicans and the radical socialists and communists. The Ã©lite of French society and the army were the same people. The army still consisted of officers who were socially aristocratic and politically monarchists. The cult of the flag and contempt for the parliamentary republic were two essential principles in the army of the time. French governments wereÂ dominated by republicans but were very factious and unstable. There was also rising anti jewish sentiment in France as in all of Europe. It was in this context that the young artillery officer Captain Dreyfus was convicted by a secret military court of passing secrets to Germany. 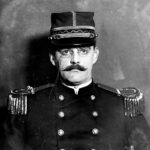 As an Alsatian Jew, Dreyfus had few supporters outside of his immediate family and friends and the case received little public notice.Â Mathieu Dreyfus was the elder brother of Alfred Dreyfus. He was convinced of his brothers innocence and dedicated his life to proving it. As the years passed the pro Dreyfus side grew, especially among left wing intellectuals.Â The campaign for the review, relayed little by little into the leftist anti-military press, triggeredÂ a virulent and sometimes violent anti Semitism. Many of France’s right wing newspapers were openly anti semitic and continued to condemn Dreyfus and his supporters.

Through an investigation in 1896Â ofÂ Georges Picquart,Â the new headÂ of counter-espionage,Â a French Army major named Ferdinand Walsin EsterhazyÂ was identified as the real culprit. After high-ranking military officials suppressed the new evidence, a military court unanimously acquitted Esterhazy after a trial lasting only two days. The Army then accused Dreyfus of additional charges based on falsified documents. Word of the military court’s framing of Dreyfus and of an attempted cover-up began to spread.

In 1898 the famous writer Ã‰mile Zola published a letter titled “J’accuse” in a Paris newspaper setting out the facts of the case.Â “J’Accuse …!” provided for the first time a compilation of all existing data on the affair in one place.Â The article was a direct attack on all those who had conspired against Dreyfus, including the minister of war and the General Staff. Â Activists put pressure on the government to reopen the case. The affair exploded. It led to several trials at which Zola and Picquart were jailed and led to both pro Dreyfus and anti semitic riots.

In 1899, Dreyfus was returned to France for another trial. The intense political and judicial scandal that ensued divided French society between those who supported Dreyfus, known as “Dreyfusards”, such as nobel laureate Anatole France, philosopher Henri PoincarÃ© and leading left wing politicians like Georges Clemenceau Â and those who condemned him, the anti-Dreyfusards, such as Ã‰douard Drumont, the director and publisher of the anti semitic newspaper La Libre Parole. The new trial resulted in another conviction and a 10-year sentence. Newly elected French president Ã‰mile Loubet, issued a pardon and Dreyfus was set free.

Eventually all the accusations against Alfred Dreyfus were demonstrated to be baseless. In 1906 Dreyfus was exonerated and reinstated as a major in the French Army. He served during the whole of World War I ending his service with the rank of lieutenant-colonel.

The Affair from 1894 to 1906 divided France deeply and lastingly into two opposing camps: the pro-Army, mostly Catholic “anti-Dreyfusards” and the anticlerical, pro-republican Dreyfusards. It embittered French politics and encouraged radicalization. Eventually as the 20th century worn on the leftists parliamentary republicans came to dominate French politics and still do.Â There was a strengthening of parliamentary democracy and a failure of clerical, monarchist and reactionary forces. The affaire also convinced many jews of the merits of a jewish homeland and led to the rise of Zionism.

In June 1899 at theÂ Auteuil Hippodrome – Horse racing track in a wealthy district on the western side of Paris. A scuffle broke out between the great and the good who were in attendance. The industrialistÂ Comte Jules-Albert de Dion, the owner of the worlds largest motorcar company, De Dion-Bouton,Â struck the president of France,Â Ã‰mile Loubet, Â on the head with his walking cane. Loubot was the man who pardoned Dreyfus and ultimately defeated the clerical and monarchists opposition. De Dion believed that Dreyfus was guilty. He was sentenced to 15 days in jail and fined 100FR for the assault.

Comte Jules-Albert de Dion was the heir to a very wealthy aristocratic French family. He was a pioneer of the car industry and a keen racer of the cars his company built. Both steam in the early days and internal combustion engines in later years. His companies were major advertisers in various Parisian newspapers.

The first motor race took place on 22 July 1894 and was organised by Pierre Giffard the editor ofÂ Le Petit Journal, a Parisian newspaper. It was run over the 122 kilometres distance between Paris and Rouen. Essentially it was a publicity stunt to promote the newspaper. A successful ploy which has been repeated many times since. The race was won by de Dion, although he was not awarded the prize for first place as his steam powered car required a stoker and the judges deemed this against the rules. This may have lead de Dion to dislike Giffard. Giffard was also the creator of the Paris-Brest-Paris bike race in 1891 and the Paris marathon in 1896.

The first daily sports paper in France was called Le VÃ©lo. Founded in 1892 it mixed sports with news and political commentary. In 1899 it had a circulation of 80,000 copies per day and was very vocal in it’s support of Dreyfus. Its editor Pierre Giffard had joined it in 1896, from Le Petit Journal, was a supporter of Captain Dreyfus. He reported the melee at the horse race and the arrest of de Dion in a way that so antagonizedÂ de Dion he withdrew all advertisements by his companies from Le VÃ©lo. Two other industrialists,Â Adolphe ClÃ©ment and Ã‰douard Michelin followed suit. A year later the 3 men join forces and launched a rival sports paper,Â L’Auto-VÃ©lo. It’s objective was to drive Le VÃ©lo out of business.

Adolphe ClÃ©ment was a manufacturer of cars, boats, aircraft and bicycles.Â He employed a prominent racing cyclist, Henri Desgrange, as a publicity writer. Desgrange who had published a book aboutÂ cycling tactics and training was appointed as the editor ofÂ L’Auto-VÃ©lo. Giffard’s paper was printed on green paper, so Desgrange decided to use yellow paper forÂ L’Auto-VÃ©lo. 3 years laterÂ L’Auto-VÃ©lo had made little inroads into the circulation of L’VÃ©lo. To rub salt into that wound, in January 1903, Giffard won a court case forcing Desgrange to drop VÃ©lo from the name. In future the new paper would be known as L’Auto.

Desgrange had called a crisis meeting of his staff in the officesÂ of L’AutoÂ onÂ Rue Faubourg Montmartre in Paris in NovemberÂ 1902. In order to boost circulation and find a way “to nail Giffard’s beak shut”. Â Various suggestions were made none of which Desgrange liked.Â GÃ©o LefÃ¨vre was a 26-year-old journalist whom had

been head-hunted from La VÃ©lo to be the rugby and cycling writer for l’Auto.Â  LefÃ¨vre played both sports but was keener on cycling. He later claimed that when it was his turn to make suggestions he could not think of anything useful to say and rather than upset Desgrange by being silent he suggested a six-day race round France.Â Desgrange said “As I understand it, little GÃ©o, you are suggesting a Tour de France”. Desgrange and LefÃ©vre had lunch together and thrashed out the details of the idea. Henri Desgrange then proposed the idea to the companies accountant and owners, who agreed to back it financially. Le Tour de France was born. With the enforced name change it was seen as an all or nothing effort by l’Auto. 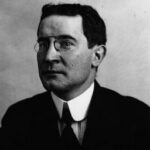 The first editionÂ started on 1st July 1903. It was an instant success. By the end of the race L’Auto was selling 130,000 copies.Â In 1904 Le VÃ©lo ceased publication and L’Auto was the leading sports paper in France.Â Pierre Giffard wrote for various publications before taking a job from Desgrange at L’Auto in 1910.Â The record circulation claimed by Desgrange was 854,000, achieved during the 1933 Tour. Henri Desgrange continued to organise Le Tour de France until his death in 1940 when L’Auto came under the control of the occupying Germans. When the war ended the French government closed l’Auto and all other papers that had published under the germans.